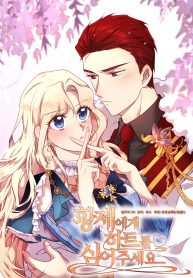 Our protagonist ended her day as usual, rereading her favorite novel to get to sleep. But, after awakening in the body of the young Charlioni, princess of the Kingdom of Linoa, she knew it was only a matter of time before her kingdom’s ruthless defeat at the hands of Casikaf, blood-thirsty Emperor of Pretas. Such a defeat would surely spell suffering for her as this character was known as the emperor’s prisoner bride, forced to bear his child and wither away, locked within the palace. The new Charlioni concludes that the only way to save herself and her loved ones is to seduce the emperor herself and try to reason with him to end the war. Fortunately, she has the upper hand of knowing that he’ll fall madly in love with her at first sight just like he did in the original novel. There’s just one problem. The emperor is totally her type! With lives and hearts at stake, who is really seducing who? And will her efforts be enough when the novel starts veering off track and every character is not who they appeared to be?

What are webtoons? is the big question that beginners want to know. On Manhua.info you can find out this answer, and the site gives you free webtoons.

Where the Wolf Howls